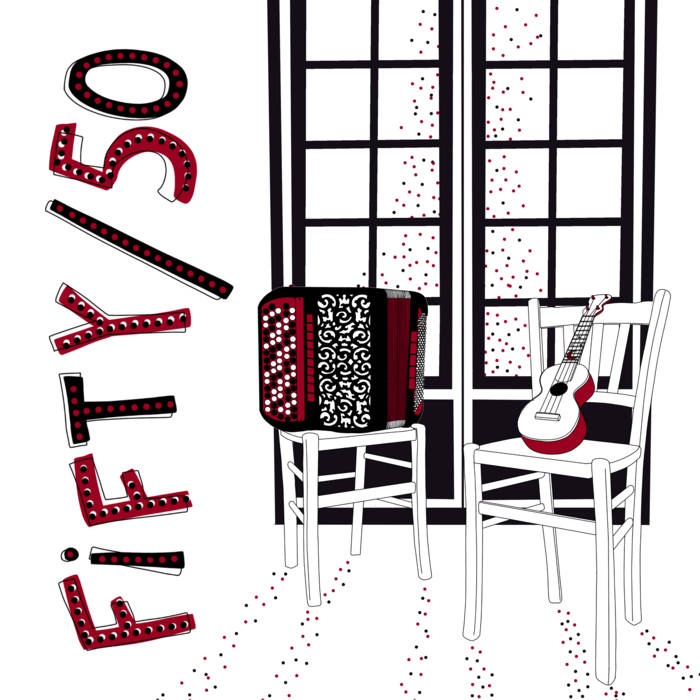 MC The incredibly fun and danceable Ukulele and Accordion album you didn't know you need. Trust me you do!

Limited edition Lathe Cut Records of singles as well as the full Album are available on my website:

A transatlantic, intergenerational collaboration, FIFTY/50 is a concept that, while gently smoldering for half a decade, was ignited in the throes of 2020. Featuring the unlikely pairing of accordion and ukulele, FIFTY/50 brings a fresh sonic palette to the works of each composer.

Master accordionist Jacques Pellarin joins four string evangelist Christopher Davis-Shannon as they embark on a journey across continents sharing musical ideas ranging from jazz, to classical, to reggae. Recorded in Avallon and Philadelphia, FIFTY/50 draws equally from the worlds of improvised as well as composed music.

Pellarin, a veteran composer, with multiple international tours, film placements, and more than ten albums to his credit brings his unique brand of French cinematic music to the foray. As influenced by Bach trios as he his American jazz, Pellarin’s compositions embody his decades of genre bending experience with an ever-present tinge of the French countryside.

Davis-Shannon’s ukulele bears equally the imprints of early virtuosos such as Ernest Ka’ai paired with the harmonic sensibility and subtlety of Johnny Smith. His compositions run the gamut from the Satie inspired minimalism of ‘Media Luna’ to the folk simplicity of ‘Willow’ featuring Charlotte Pelgen (Bad Mouse Orchestra/Moon Berries).

As much a testament to their friendship and contrasting worlds as it is to their musical prowess FIFTY/50 serves as a soundtrack to both musical days gone by and the enticing future of both artists.

Recorded in Avallon, France and Philadelphia, US

Mixed and Mastered by Adam Stehr